Our Brands And Products

The Aussiespeed brand was started in July 2003 in Adelaide, South Australia, with the first products in the range being supercharger carb adaptors and billet valve cover spacers. The products were sold as Aussiespeed before any of the intellectual property was registered. It took a few years to get off the ground and in 2006 the Aussiespeed name was registered as a business in South Australia and other products we had been working on started to become available. When we first entered the market we were looking at products that were difficult to find or were not available. The Aussiespeed air cleaners came about when all that we could find were chrome imports with pressed tin tops and bases. Being involved with early Holden and having a soft spot for the Red and Grey Holden motors, we started to get involved in casting manifolds, rocker covers, sideplates and the list just goes on and on.

Aussiespeed had a lot of success with Ford 6 cylinder crossflow engines involved in drag racing and speedway with our valve cover spacers being available for guys wanting to fit roller rockers. We next went about making a tall alloy rocker cover for the Ford 250 cast iron and alloy headed 6 cylinder Ford engine. One of the problems we found with rocker covers were poor breather baffles. We went about making a funnel style cone shaped breather shroud that doesn’t rely on screws, tin plates or rivets to hold it in place. Most of the Aussiespeed valve covers now use this style of oil cap filler and PCV breather. It took a few changes along the way to get it right and customer feedback has been great both in Australia and the USA with our V6 Chevy valve covers. Some of the very early Aussiespeed alloy rocker covers had our logo cast on the outside of the rocker cover and has since been changed to the inside. Who knows, the alloy rocker covers with the logo on the outside might be collectors items some day.

When Aussiespeed Street & Race Performance Products started, the first Hemi 6, 4 barrel manifold that was produced was a copy of the Cain Hemi 6 manifold. Aussiespeed reproduced the manifold from tooling that was made by a local Adelaide pattern maker as the original pattern equipment had been disposed of. With John Cain being a pioneer in the development of early Australian speed equipment, John was contacted and gave Aussiespeed permission to use his name “John Cain Manifolds” and “Cain Manifolds”. As products were further developed and with so many internal changes to the Aussiespeed range of Manifolds the Cain name was dropped. 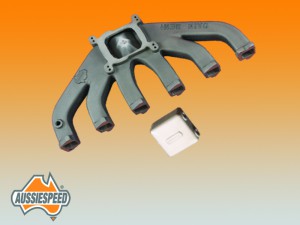 Pictured is an early Aussiespeed reproduction of the John Cain Hemi 6 cylinder Chrysler manifold. We further developed the manifold with a bolt in style plenum filler that was named the “Aussiespeed Plenum Pig” that in some dyno testing increased horse power from 276HP to 304.5 with an increase in torque also gained. The AS0019 has been replaced by the the AS0265 with its advanced plenum design that does not require the fitting of an insert. The AS0265 was run on a street driven turbo charged Valiant Charger that made just over 500 rear wheel horsepower. The same manifold has been used on mild street cars and achieved great results. The Plenum Pig part number AS0084 is still available from the Aussiespeed online speed shop.
SCHOEN ENGINEERING MAXITORK MANIFOLDS

In 2006 Aussiespeed Purchased the dies and machines that were used to make and machine the Maxitork Holden V8, 2 and 4 barrel, 253 and 308 manifolds and the Holden V8 timing cover. Both the manifold and timing cover had been made in South Australia at the Beverley machine shop, the Maxitork was a registered design No 82520. There were many brands that the Maxitork manifold was manufactured. Due to trademark laws we are unable to disclose the brand names. After the purchase was made, part of the pattern equipment was stolen and the manifold die was scrapped and to our knowledge was the only die that was ever made to cast the manifold. The timing covers are still produced by Aussiespeed and the machining processes are now done on a CNC machining centre and the old purpose built machines have been sold off. 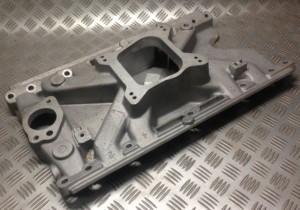 In 2009, negotiations started with Kit Cullan to buy the Holden 6 cylinder Cullan Special manifolds to suit red and blue motor 6 cylinder engines. After testing and looking at the changes and benefits in the newer style of inlet manifolds, Aussiespeed had been working on, the Ultraflow pattern equipment underwent massive modifications and the Ultraflow name is no longer used.

In 2009 The Holden V8 Stripmaster Manifold pattern equipment was purchased from PM engines in South Australia. The Stripmaster manifold is now sold as an Aussiespeed Stripmaster®. Not much has changed except the manifold has had some external weight reduced and the port opening on the cylinder head has been closed up slightly to make it easier to match port cylinder heads. The plenum and runners are exactly the same and the original core box was used.

The Active manifold brand has had many owners over the years. It started with an early 308 Holden V8 headed manifold that has disappeared. When Australian High Performance Industries purchased the Active or Inner Active as, the name was changed to by the last owner of the brand in Blackstown NSW, we didn’t buy the Ford Cleveland manifold or the early V8 Holden patterns.

The AussieSpeed Active range consists of the VN 5 litre Holden single 4 barrel manifold and an air gap style Ford Windsor manifold to suit 289 and 302 Ford Windsor engines. Also purchased was a VN onwards Holden V8 rocker cover pattern that has since been retired and superseded by the new Aussiespeed VN headed rocker covers. 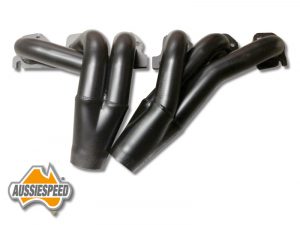 With the Hurricane slant 6 manifold taking off worldwide we got emails from customers wanting to know what the best headers were to use with the Aussiespeed Hurricane manifold. We tested many different types of headers & the biggest problem was getting them to fit both left & right hand drive cars. We worked in with customers both in Australia & the USA & the first model the AS0040 headers with a 1 1/2 inch primary pipe was introduced. we found problems with the Aussiespeed AS0040 headers fitting the left hand drive US cars. With some dyno work being done on the supercharged 225 VC Valiant ute the decision was made to increase pipe diameter to 1 5/8 & both horse power & torque increased. With the larger Aussiespeed AS0198 extractors the more boost we put in the power increase did give us the results we wanted. We found the limitation of the smaller pipe had a big affect of horse power. The headers were then fitted to non supercharged engines & the figures also improved so the 1 1/2 pipes were scrapped & the AS0198 big bore headers replaced them for use on both left hand drive 1967 up & from R series, S series, AP5, AP6, upwards right hand drive cars & trucks.

AHPI or Australian High Performance Industries, use as many South Australian based small to medium size businesses to produce the range of performance products and speed equipment. It’s great to produce a product that uses local knowledge, labor and was designed right here in Australia, that is exported around the world and holds its own when it comes to quality and performance.